U Ba Khin (1899 – 1971), a remarkable, revolutionary character in Asian history, realized how merely more laws and fresh threats of punishment would not end corruption. To bring about organizational and national change, he enabled the individual to change himself – instead of shrilly clamoring for other people to change their behavior.


U Ba Khin’s instrument of change was the ancient self-observation practice of Vipassana. And the results were so positive that prime minister U Nu, Burma’s last civilian leader, asked him to head four governmental departments at the same time.

On January 4, 1948, Burma's Independence Day, U Ba Khin became the first Burmese Accountant-General. This post was earlier held by the ruling British. He retired on March 26, 1953. The boy who was a brilliant student, but whose family could not afford to give him college education, later became the man who gave his country exemplary service - so much so that his governmental tenure was extended for over a decade in prominent positions.

As a bureaucrat, U Ba Khin became a living example of integrity and efficiency in challenging circumstances. His much respected, successful career proved that honest people need not compromise, or finish last.

U Ba Khin’s successes - such as transforming the corruption-ravaged Accountant General’s office and the State Agricultural Marketing Board - became outstanding practical lessons in human resource management.

Unlike India’s new Lokpal legislation to find more means to catch and punish corrupt officials, U Ba Khin’s method was to prevent officials from succumbing to temptations to crime. With insightful wisdom, he focused on a core source of corruption: pending files, and thereby bribes from the public to get their work done.

U Ba Khin fixed a time limit for files to be cleared. “If an official cannot decide within the stipulated time, let the file be brought to me,” he instructed. “I will take a decision. Not taking a decision and not bringing the file to the superior official indicates dishonest intention. It may result in dismissal from service.”

“U Ba Khin was aware that someone who takes bribes never changes for the better merely under threat of punishment,” said former Burma-born industrialist and principal Vipassana teacher Sayagyi S. N. Goenka who was U Ba Khin’s leading student. “He encouraged practice of Vipassana, and conducted Vipassana courses in a large hall in his office. The change was noticeable as employees stopped taking bribes, corruption reduced and was finally eliminated.” 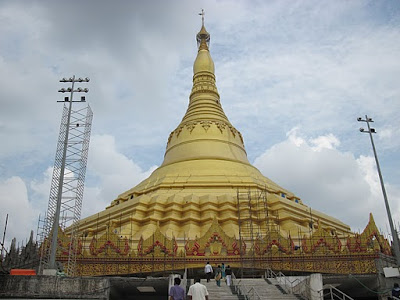 The Global Vipassana Pagoda, Mumbai, India, is a Dhamma project that Sayagyi U  Goenka started in 1997 to commemorate the birth centenary of Sayagyi U Ba Khin in 1999


U Ba Khin’s life inspired businessman and bureaucrats in Rangoon after World War 11 that it is possible for them to succeed without being corrupt.

One such wealthy industrialist was Satya Narayan Goenkaji, born in the royal Burmese city of Mandalay. He came from a Indian-origin business family from Rajasthan. Like U Ba Khin, the boy was a brilliant student (his headmaster gave double-promotion in school) with tremendous capacity for hard work. By age 30, S.N. Goenkaji was elected president of the Rangoon Chamber of Commerce and head of many social, educational and cultural organizations.

But Goenkaji’s life, and India’s destiny, was to change when he learnt Vipassana from U Ba Khin. In 1969, Vipassana returned to India through Goenkaji, 2,500 years after the practical quintessence of the Buddha's teaching was lost to the land of the Buddha.

Within a decade in Mumbai, Goenkaji renounced his wealth and life as a successful businessman to dedicate his life to sharing benefits of Vipassana – a Dhamma task, he said, he was doing on behalf of  his teacher Sayagyi U Ba Khin.

U Ba Khin’s fervent wish to see Vipassana shared worldwide was fulfilled. Vipassana is being taught, free of cost, in over 120 countries in over 50 languages, by trained teachers and assistant teachers of Goenkaji.

Vipassana, meaning ‘to see the truth’ in the ancient Pali language, is developing the faculty to see the truth within. One experiences the inner truth of mind-matter, every changing, impermanent moment.

Inner change comes with the realization that the actual inducement for corruption is not wads of bank notes - (the apparent reality),  but deeper, actual reality of the gratification of certain biochemical sensations flowing within the body.

A Vipassana practitioner realizes how only the superficial surface of the mind is in contact with worldly objects. Every thought in the mind arises with a changing biochemical sensation within. But the deepest part of the mind, where behavioral conditioning takes place, is in constant contact 24/7 with bodily sensations. This is why one rubs a mosquito bite even in deep sleep.

Vipassana involves constant vigilance of oneself, every moment. In an unguarded, heedless mind, this flow of impure craving can multiply, overpower oneself. Normal mental speed breakers like reason, restraint, fear of discovery, disgrace and punishment are all overwhelmed. Like an addict to drugs, the corrupt succumb to temptation, and then commit criminal actions.

Vipassana - the objective observation of impermanent bodily sensations - cleans the mind at the deepest level. When impurities in the mind are removed, suffering is removed.

A corrupt person is actually reacting to sensations - namely, a biochemical flow of subatomic particles within the body - set off by thoughts of greed. Tempting objects are only the apparent external reality. The inner craving for a particular type sensation is the actual story of suffering. Vipassana makes one aware of this internal process that goes on every moment. Freedom from corruption comes with not reacting to these sensations - whose nature is to arise and pass away.

The pure equanimity of non-reaction to sensations de-conditions the mind. This is a law of nature, just as a fire dies gradually dies when no more fuel is added. Deeply entrenched unwholesome behavior patterns of the mind gradually weaken and pass away.

Experiencing anicca, the Pali language word for impermanence, at the level of sensations, then becomes the most powerful force of inner change.

"Anicca is inside of everybody, within reach of everybody. Just a look into oneself and there it is - anicca to be experienced,” Sayagyi U Ba Khin said in a landmark lecture . “The experience of anicca, when properly developed, strikes at the root of one's physical and mental ills and removes gradually whatever is bad in him, i.e., the causes of such physical and mental ills… Anicca is, for the householder, the gem of life, which he will treasure to create a reservoir of calm and balanced energy for his own well-being and for the welfare of society."

One's real enemies are within - the corruption of impurities in the mind. The true well-being of the individual, and a nation, comes with removing these inner impurities, injuries in the mind.This cleaning, healing of the mind is achieved with practice of Vipassana.

* Benefits of Pure Volition of Dāna
---

For Benefit of Many, Happiness of Many 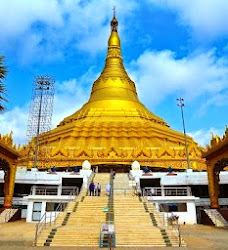 A 325-feet high Dhamma monument built on Gorai Island, Mumbai, India, to share the tangible benefits of Vipassana meditation - the universal, non-sectarian practice to remove deep-rooted harmful habit patterns of the mind. One lives with equanimity, true happiness and goodwill for all beings.

The Global Vipassana Pagoda was inaugurated by the President of India on February 8, 2009.

Visiting the Global Pagoda is free of charge. No entry fee, and for tour guides.

* Pagoda: A Symbol of Gratitude

* How to Reach the Global Vipassana Pagoda

Last Moment of this Life